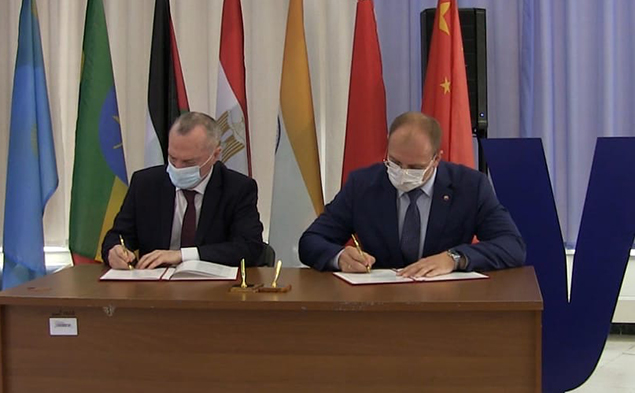 Sergey Morozov, Governor of Ulyanovsk Oblast, a Russian region some 850 kilometres East of Moscow, yesterday signed a Memorandum of Understanding (MoU) with the International Social Security Association (ISSA), in support of Vision Zero. Nikolay Kozlov, Deputy Chairman of the Board of the Pension Fund of the Russian Federation and ISSA Treasurer, signed on behalf of the ISSA.

The Vision Zero approach to safety, health and well-being at work has become an immense success in Russia. During the All-Russia Occupational Safety and Health Week in 2018, the campaign was launched for Eurasia, and Russian cosmonaut Sergey Volkov became Vision Zero Ambassador for the region. In the 2019 edition of the same event, the first Global Vision Zero Business Council was organized, and in 2020 the HSE DAYS was launched to implement the Vision Zero concept in Russian industry. A large proportion of the more than 12 000 companies, organizations and occupational safety and health trainers that have signed up in support come from Russia.

The MoU signed in Ulyanovsk Oblast brings Vision Zero to the level of regions, and is a new step forward for developing a world of work based on safety, health and well-being in Russia. This also has an important impact on the sustainability of social security systems. In a video message, ISSA Secretary General Marcelo Caetano expressed, “I am sure that today’s signing of the Memorandum of Understanding on cooperation between the Government of the Ulyanovsk Region and the International Social Security Association in this area will be a serious foundation for further strengthening the social protection of citizens of the Russian Federation.”

Vision Zero is taking important steps in becoming more than just a campaign, but a strong strategy with substantial tools at its disposal. During this week’s World Congress Digital Meeting, a new Vision Zero Accredited Training programme was launched in partnership between the ISSA and the Institution of Occupational Safety and Health (IOSH). The event was also an opportunity to present the recently developed Vision Zero Proactive Leading Indicators, which are available in a free-to-download guide. Further steps will be taken in the year ahead and presented at next year’s XXII World Congress for on Safety and Health at Work in Toronto, Canada.